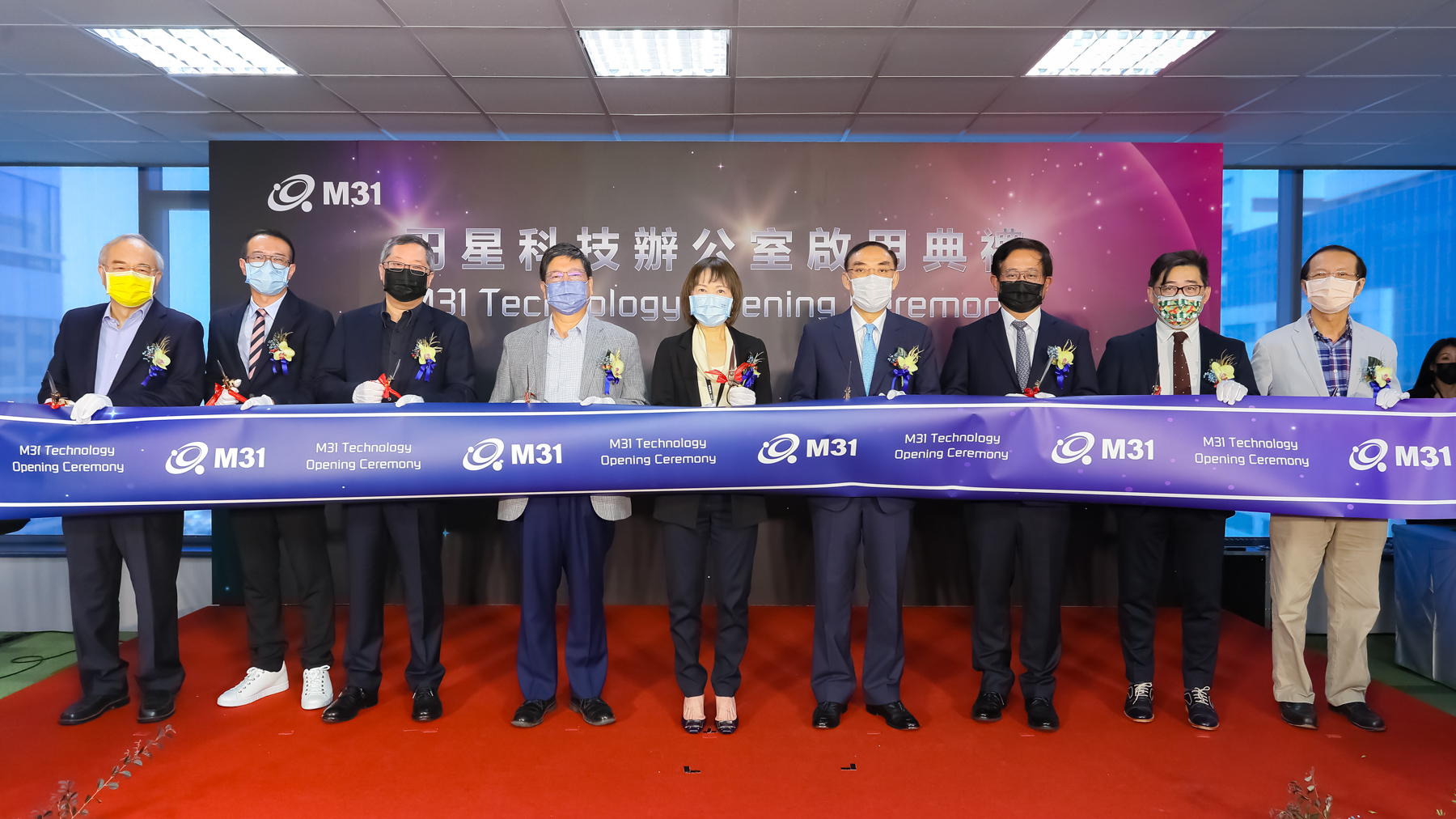 M31 Technology (M31), a supplier of TSMC’s silicon intellectual property, held its 10th anniversary celebration and the opening ceremony of the new headquarters office in Hsinchu, Taiwan, on October 6, 2021. Mr. Wen-Kei Yang, Governor of Hsinchu County, Mr. Ching-Hsiang Tsai, Minister of Justice, and leaders from the semiconductor industry, Mr. Suk Lee, Vice President of TSMC's Design Infrastructure Marketing Division, Mr. Brian Sung, President of Cadence Taiwan Region, Mr. Hung-Ming Lin, Chairman of ASPEED Technology, Mr. I-Hau Yeh, Chairman of ELAN Information Technology, and Mr. Chih-Ming Lin, Chairman of Andes Technology were all present to the ribbon-cutting ceremony event, in addition with more than 20 advanced industry representatives were also there to support the event. Mr. Wen-Kei Yang, Governor of the County, said, "I was amazed by the unique and creative opening ceremony of M31's new headquarters today, and I believe that every IP developed by M31, just like the M31 Andromeda Galaxy, can be seen and realized in the future.” Minister of Justice Ching-Hsiang Tsai said, "I felt like walking into a space museum when I stepped into the new M31 headquarters, and the Ministry of Justice's efforts to strengthen the protection of intellectual property rights and trade secrets of high-tech companies by amending the law. It is the direction of the government and the industry to work together.” TSMC Suk said, "I remember when M31 joined the TSMC Silicon Alliance in 2012, it was just a 30+ people start-up company, but now it has grown and thrived. TSMC appreciates the contribution M31 has made to Silicon Alliance over the years and looks forward to continued cooperation with M31.”

M31 celebrated its 10th anniversary in October this year as an important milestone, continuing the philosophy of the company founder, Mr. Hsiao-Ping Lin. Dr. Huey-Ling Chen, Chairman of the Board, said that the new office environment is the result of Hsiao-Ping Lin's two years of hard work, showing his desire to take care of its employees everywhere. M31 insists on being a professional and independent IP company. After 10 years of hard work, it has become one of the few companies in the world that can provide advanced process IP. M31 has accumulated more than 400 successful designs of high-quality IPs, which are recognized by international manufacturers, showing the world that Taiwan has abundant innovative R&D power and strength, which is not easy as it seems. M31 will keep expanding its IP territory with the trust of our customers and the pursuit of high-quality silicon intellectual property.

M31 has been a member of TSMC's SIP Alliance since 2012. Its main products include High-Speed Interface IP designs such as USB, MIPI, PCIe, SATA, SerDes, etc., as well as Fundamental IPs including cell library design, memory design, and ESD IO/ONFI_IO, and actively invest in the development and verification of SIP for advanced processes. The physical IP solution that has advanced from 12/16nm all the way to 5/7nm, we are now in the process of developing and certifying the 3nm IP in full swing. M31 not only passed the ISO9001 certification in 2013 to ensure the quality of "High-Quality IP", but also won the ISO 26262 development process certification in 2018 to enter the high-end automotive electronics market, and immediately won the favor of major automotive customers in the same year. Based on the strong customer portfolio, M31 has an in-depth understanding of the needs of IC designers. On the occasion of the tenth anniversary, M31 launched an IP integration service to help customers achieve the performance improvement of the physical IP and standard cell library IP implemented by the CPU core in the shortest possible time, so that customers can focus on chip design differentiation and system-level integration, helping customers' IC products to be more competitive in terms of performance and cost.

The completion of M31's new headquarters office is different from the stereotypical image of a technology company as a rational but relatively cool, creating a humanistic atmosphere with creativity and artistic aesthetics, embodying the company's philosophy of boutique culture and making art a part of technology. M31 will expand the recruitment of talented people and deepen partnerships to consolidate the momentum for sustainable growth in the future based on the solid foundation laid in the past decade!